At last a one woman show of Clara Peeters at the Prado. Only one room, but it's a start. Peeters' magnificent still lifes along with Vigée Le Brun's portraits disprove Linda Nochlin's contention that there were no great women artists in the past-- they were there, but were written out of art history in the 19th century. See my article on the subject, "Art Criticism and Women Artists," first published in the Feminist Art Journal in April 1972, available at the Getty Research I 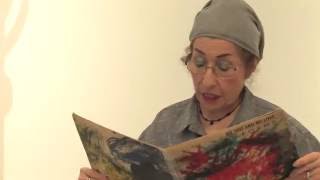 Nancy Grossman and "My Terrible Stomach"

So glad to see that the incredible Nancy Grossman is still at it! My interview with her from the early 1970s is included in Art Talk #blog

As Vito Acconci closes his retrospective at MoMA P.S.1, I am brought back to my encounters with him back in the 1970s. My interview with him was published in Arts Magazine in March 1970 and I wrote about my experiences with him in my memoir Firebrand. Here is an excerpt about Vito Acconci that is in my memoir Firebrand and below you can find a scan of the interview from Arts Magazine, March 1970: I had gone to see an exhibition at the Jewish Museum called “Software,” and whil

Cindy Nemser and Chuck (1975), oil on canvas, 105.41 cm x 75.565 cm In 1975, at the age of 38, I was decided it was time for me to let Alice Neel paint my portrait. She had asked to do it when I first met her years earlier but I declined fearing I would like Frankenstein’s daughter. However, now I believed she was the foremost portrait painter of the twentieth century, and I considered it an honor to sit for her even if my portrayal didn’t turn out to be flattering. I was joi

My Memories of Eva Hesse

Earlier today I saw a lovely tweet from a young art history student: It brought back memories of Eva Hesse, so I wanted to share the article I wrote along with that interview, first published in Feminist Art Journal and included in my memoir Firebrand: My Memories of Eva Hesse After my women artists’ forum was done, I had cast about for a new subject to interview for Artforum. I asked the dealer Abe Sachs if he could recommend an up-and -coming artist. He mentioned the name o

Hello Cindy, I am pleasantly surprised to have found your email address online, and I hope you don't mind my contacting you. I am a thirty year old painter living with my husband in Cambridge, Massachusetts. unfortunately I have never had a significant woman teacher or artistic mentor, although I have plenty of peers who are women artists. I just learned about you two days ago while I was researching Eve Hesse. I checked Art Talk out of the library and I was blown aw

From Robert Zakanitch -- I am happy to get in touch with you as I recently was sent your book on Ben Cunningham. I want to thank you so much for writing it. You indeed writ for the underdog! It brought back vividly my years in art school studying with Ben and Hans Beckman --a good friend of his. I was very taken by the book. It filled in so many gaps and stated so clearly his many years of undeserved obscurity even after his showing at MOMA with the OP-ART exhibitions (nev